Chocolate could lower our risk of diabetes?

Whoops, this was published yesterday by mistake without me even finishing it! Lets try again…………….

Earlier this month, the Daily Mail reported that ‘eating dark  chocolate can improve thinking, decrease appetite and lower blood pressure‘. So this is where I have been going wrong all this time, I must eat more chocolate?!

I hold nothing against Daily Mail readers BUT as I often say to my students, you need to read between the lines when reading newspaper articles.  All too often the press give an over-simplistic viewpoint and in this case, potentially misleading information. According to Wikipedia (another not-always-so-reliable-source in my eyes) the Daily Mail has an average daily circulation of 1,708,006 copies with a daily readership of ~ 3.95 million – that’s an awful lot of people being taken down the wrong path! 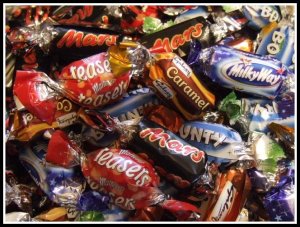 Type 2 Diabetes is very much associated with diet and lifestyle.  It occurs as a result of excess Calorie consumption; each time we eat, we release insulin whose job it is to get glucose from our blood stream into our cells (so they can use it for energy).  Overeating (particularly excess sugar) means that our body releases loads of insulin and over time, we start to become unresponsive to it.  If insulin no longer works effectively in our body we are unable to regulate our blood sugar levels properly and we end up with high blood sugar – this is diabetes. In the UK, ~ 2.9 million people are affected by diabetes and 90% of these suffer from type 2 (Type 1 is less common and is quite different; as a result of the body not producing insulin at all).

The Mail referred to the original article, published in the Journal of Agricultural and Food Chemistry and revealed that an antioxidant in cocoa can prevent mice from gaining weight and that it also lowered their blood sugar levels, so they concluded dark chocolate could help prevent Type 2 Diabetes.  I have a problem with this and must say these are very premature assumptions that these effects will directly translate to humans and that even then the effect would be significant.  The antioxidant they talked about was a type of flavonoid (see yesterday’s blog) called ‘oligomeric procyanidins’, or PC for short. Apparently, these flavonoids appear to possess the greatest  anti-diabetic properties of all the polyphenols in cocoa but I don’t think this means we should all rush out and fill the cupboards with it……..not just yet!

I think we need to be cautious with these findings, certainly until we hear about further supportive evidence and remember that chocolate is still a food that could contribute to the development of Type 2 Diabetes; no matter what type of chocolate we’re eating, it will cause your blood sugar levels to rise and in light of this it’s best to limit chocolate consumption to small amounts. We need to bear in mind that any potential benefit can easily outweighed with excessive consumption.

Secondly, the calorific content of chocolate is relatively high and therefore over-consumption of chocolate could lead to weight gain, leading to obesity which also raises the risk of heart disease.  A proven method of reducing your risk of type 2 diabetes is to maintain a healthy weight, and contrary to media reports, a diet rich chocolate is not going to help you with that.

To give you an idea of what I mean, here is the fat and sugar content of the different types of chocolate.  I am not on commission for Green and Blacks, this is just the information I found (on Tesco’s website) –

So even ‘just’ 40g (a typical chocolate bar amount) of the 85% cocoa bar contains ~21g fat (that’s nearly a third of a women’s daily fat allowance of 75g).  Interestingly this particular brand of dark chocolate contains the most Calories and fat, yet there we were, all thinking that dark chocolate is the best.  It might be in terms of flavonoid and tryptophan content but perhaps less is more should be the mantra with chocolate.

You will see over half the white chocolate is just sugar (that’s 20.5g sugar in a 40g bar, equivalent to >4 teaspoons of the white stuff

) and the milk chocolate is not far off that either.  This is not good for stabilising your blood sugar levels and certainly not good for reducing your risk of developing type 2 diabetes in the long term.  Cadbury’s Dairy Milk has always been advertised as containing ‘a glass and a half of milk in every half pound bar of chocolate‘.  This marketing makes chocolate appear to be a good choice? that it could be viewed as a good source of milk, that it might even be good for you…..I am thinking of the old ‘Guinness is good for you’ advert (no that’s not true either!) So beware of advertising and marketing ploys, chocolate needs to be consumed in small amounts; foods in moderation are fine in my book.

What about diabetic chocolate?

Generally speaking, diabetic chocolate is made by replacing some or all of the sugar content with artificial sweeteners like maltitol or sorbitol.  Sweeteners are often 100’s-1000’s of times sweeter than sugar but they do not get absorbed in the gut, hence the 0 Calories value.  Oddly enough they can give quite a bitter taste and some people just can’t stand the taste of them.  We do need to be a bit careful too as sweeteners can have a laxative effect and you will certainly find this out if you eat too many of them!  Some people find diabetic chocolate to be a good alternative compared with regular chocolate, however many with diabetes find diabetic chocolate to not have enough redeeming benefits and that a little bit of the real stuff, as part of a healthy diet is a better choice.

So have a bit of the good stuff and enjoy it!

Oh and I have only just found the buttons on here that mean I can change my font size, text colour and all sorts. Its only taken me 2 weeks, but at least I can make my posts look a bit more fancy now!