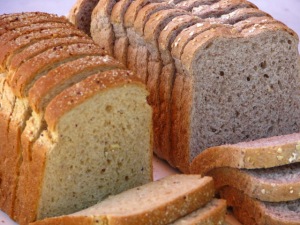 Bread has been a staple in our diet for almost 8,000 years.  I have been wondering how much bread we actually eat in the UK these days…….I was thinking that perhaps bread consumption has increased quite a bit. Bearing in mind the popularity of low-carb diets, and other  faddy diets, bread has undeservedly been cast as a villain but with so many money worries these days, rising food costs and less cash in our pockets, surely our we are eating more of this reliable staple?

How wrong was I?!

1. Bread remains one of the UK’s favourite foods, with 99% of households buying bread – or the equivalent of nearly 12 million loaves are sold each day. To put this into perspective, we eat the equivalent of 220 million slices each day, enough to cover the pitch at Wembley 51 times over!

2. White bread accounts for 76% of the bread sold in the UK.  Although health conscious consumers are looking for nutritious bread products that are made with whole grains, are lower in calorie, lower in salt and high in fibre.

3. Sandwiches account for 50% of bread consumption; whether bought or made-at-home.

4. Men eat more bread than women: 44% of men eat bread twice a day compared with 25% of women. According to the National Diet and Nutrition Survey, men consume about 113 grams of bread a day, and for women it’s 76 grams.

5. 60% of the flour produced in the UK is used to make bread. The UK produces ~5 million tonnes of flour a year from 32 mills. The rest of the wheat we use comes from Canada, the USA, France and Germany. Canada produces wheat flour of particular high quality – its high protein (gluten) content adds elasticity to the dough and  helps to make bread and baked goods lighter and rise better but it comes at a cost. Wheat is the first crop to be affected by climate change. Changes in temperature and rainfall patterns could lead to further food price rises of between 3% and 84% by 2050.

6.  About 80% of the bread eaten in the UK is of the ‘mega-bakery’, sliced, wrapped variety. Bakeries that are in supermarkets or chain stores account for 13% and the tiny remainder is the portion of the market that are small local businesses.

7. The three largest manufacturers in the bread sector are Allied Bakeries (Kingsmill), Premier Foods (Hovis) and Warburtons. The largest of these is Warburtons, These three manufacturers account for almost ¾ of the bread market.

8. Despite being a staple food in the UK for centuries, bread consumption has fallen steadily over the last few decades. Average consumption now equates to ~2-3 slices of bread a day.

9. In fact we don’t actually eat enough bread. The NHS uses the ‘eatwell plate‘ to better educate people about which types of food should make up what fraction of our diets. Starchy foods should make up 33% of our diets – but the latest government figures show those foods makes up barely 20% of our plates.

10. The UK Government’s National Diet and Nutrition Survey in 2012 suggests that bread still contributes more than 10% of an adult’s daily intake of protein, thiamine, niacin, folate, iron, zinc, copper and magnesium; 20% of our fibre and calcium intake; and more than 25% of our manganese intake. Therefore, eating bread can help consumers to meet their daily requirements for many nutrients, particularly zinc and calcium.

11. Of all the edible food we buy, bread suffers the worst fate when it comes to waste. 32% of it ends up being thrown away.

12. Food price inflation is one of the biggest issues facing low-income families; since 2007, the average price of food and drink has risen by 33%. Bread is no exception, having gone up by 34% while butter has seen the largest price rise, up 55%.

13. There are people who believe they’re allergic to bread but only 1 in 1,000 people in the UK suffers from Coeliac disease and less than 2% of the population suffer from food allergy or intolerance. Bread is also often blamed for causing problems such as irritable bowel syndrome and obesity, but there is no real scientific evidence to support these claims.