What on Earth is going on with our diet? I’m aware I’m beginning to sound like a stuck record but really, when are things really going to change?

I am actually fed up to my back teeth with cheap offers for junk food. Literally every where I go, fast food, take-aways and chocolate are shoved under my nose.

I drive 1.5 miles from my house and I see this:

I popped into Iceland this morning to pick up some milk and I am presented with an offer of 600g of chocolate for 3 quid (see the headline photo) as soon as I walk in.

I have previously ranted and campaigned about junk food at the checkouts but actually the entrance way is equally challenging. Having to wade past the towers of cakes, biscuits, chocolate eggs and grab bags sets off your shopping trip on completely the wrong foot.

Every weekday morning I see Spiderman with an advertising board (most often in the freezing cold) standing on a round-a-bout promoting a devilish Domino’s pizza deal and it’s not even 10 am. What’s that about?! 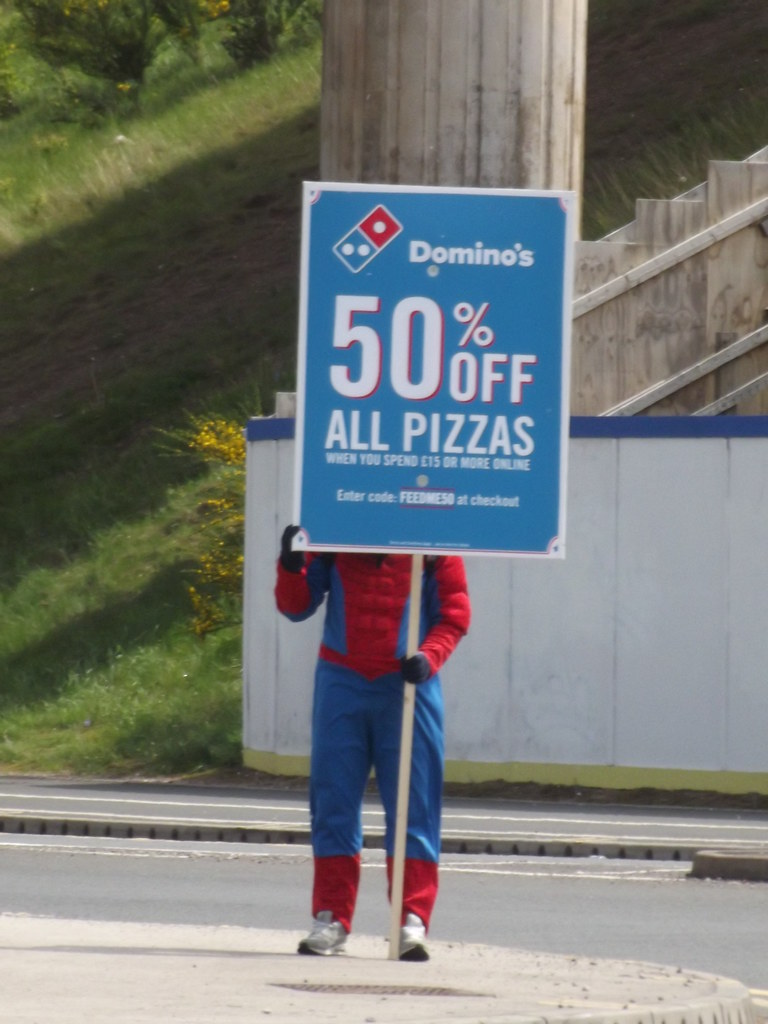 At least 5 days a week I get a flier through my letterbox; Subway, Domino’s, Pizza Hut and a selection from my local Chinese and Indian restaurants land on my mat. And to be honest I don’t even look at 99% of them. They go straight in the bin, what a waste.

The British takeaway market is worth over £5.5bn and has grown massively over the last 4 years. Just Eat and Hungry House have certainly taken the market share but due to consumer demand and the growth of the app market, other companies are starting to muscle in.

I get that convenience food has its place. We can all benefit from a helping hand at times but this hand is starting to linger like a bad smell. In the states, around 6% of the population will be eating takeout at anyone time. The principle of it is great. The problems are that we rely on it way too much and of course the majority of foods are sky high in salt, fat and sugar.

So the icing on the cake this week has been hearing McDonalds might be bringing a home delivery service to Birmingham. The city where there are more McDonald’s restaurants than any other UK city outside of London. Just fantastic.

Where Dudley already has the award for the most unhealthy place to live. Closely followed by Walsall, Wolverhampton and Birmingham. Dudley boasts a staggering 10 McDonald’s restaurants per 100,000 people, with just 3 gyms.

Compare that to Bristol, the healthiest town that has 234 cycle routes 45 sports clubs and just 2 McDonalds per 100,000 people. No wonder we have one of the highest rates of diabetes, heart disease and obesity in the West Midlands.

So my issue is this. How is the general public ever supposed to win? Most food producers and food outlets monopolise our communities. Every week a new gimmicky eatery opens on our high street, like this cereal cafe.

The Government is weak and in my opinion has done too little too late. The financial incentives to  stand up to the food industry are simply not there. How long did it take for the sugar tax to come about? And with it only applicable to soft drinks, surely the impact will be limited. The responsibility deal seems no more, not that is really made much difference because there was always the option to opt out.

Reports show we want healthier food these days. We are learning the importance of the nutritional value of food and links to disease but finding and purchasing the healthier product is often too hard.  Our good intentions and efforts to eat healthily are constantly undermined everywhere we turn.

So our healthcare service has to carry the burden, there is no comeback whatsoever on the big food giants and they have us hooked. I genuinely feel scared for the future unless somehow we can weaken their stronghold and for that to happen, big decisions and huge action must be taken. We have to limit their influence (the offers at least!!) and control over our food environment. I know it’s complicated and needs an incredible amount of joined up thinking but come on Jeremy Hunt, what’s next?

1. What is the maximum amount of salt we should consume per day?

Adults should eat no more than 6g of salt a day (about a teaspoon). The current average salt intake however is just over 8g, and many are eating more than this, primarily a result of the amount of hidden salt we eat in processed, convenience foods. Babies and children under 11 should have less salt than adults.

2. Where in the diet is most salt found?

Even if you do not cook with salt or add it to food at the table, you can still exceed the 6g limit without knowing it.

3. Salt or Sodium? Does it matter?

Many food labels state the salt or sodium content – these are NOT the same.

We easily become confused and underestimated the salt content of food when only information about sodium was provided. We used to have to do the math in our head whilst shopping to work out the salt content. For example, if tomato soup contains 0.3 Sodium / 100g, then half a tin (200g) actually contains 0.6 g Sodium, or 1.5g salt. The good news is that as of December 2014 all food labels now only list salt; sodium will not be listed.

4. What are considered high salt foods?

A food high in salt has more than 1.5g salt per 100g. High salt foods are often processed. Examples include:

We should be looking to consume more low salt products on an everyday basis and having high salt foods only occasionally. Look out for the green traffic light food labels on the front of packs.

5. How can too much salt affect your health?

Excessive salt intake can raise high blood pressure and can have serious effects on the heart. If you have high blood pressure, you are much more likely to develop heart disease or have a stroke because of the extra strain it puts on the heart and blood vessels. The World Health Organisation in (2012) stated we should be consuming less than 5g salt /day to limit the harm caused to health by excess salt.

In response to this, the Government launched a revised salt reduction strategy in 2013 that aims to help people cut their daily salt intake. This is more important than ever as it was reported that more than half the public (53%) rarely or never consider the amount of salt when buying food.

1) The National Institute for Health and Care Excellence (NICE) has since suggested reducing the adult maximum intake to 3g/day by 2025.

2) Further recommendations include ensuring more food producers take responsibility by reformulating their recipes and improve their manufacturing and production methods to reduce the salt content of commonly consumed foods as well as increasing the availability of lower salt options. Read about this public health responsibility deal here

Adults are also not the only ones at risk; more recently we are seeing high blood pressure in children as a reflection of the diet they are having (and little physical activity too). Most likely this is because children are eating the same foods as their parents.

Eating ‘every day’ foods like cereal and a slice of buttered toast for breakfast, soup and a sandwich for lunch would easily take you over the 6g limit!

You can see that a typical breakfast of cereal with a slice of toast and butter provides 1.5g salt.  Add a microwave meal or a takeaway burger and you are way over the limit.

6. How can I reduce my salt intake?

We have always known cheese contains salt – it is essential in the manufacturing process but I am sure the cheese purists will be pretty cheesed off with the findings of a new study (sorry about the puns ;-)). ‘Blessed are the cheese makers’ as they say but this new research, published in the British Medical Journal (you can read the original paper here)  compared the salt content of over 600 cheeses in 2012) and the findings weren’t pretty. We need to be aware how much salt is in some cheese.

This table (published by CASH in their press release on the 6th August) shows that some cheeses are saltier than sea water!

Watch the amount of feta in your Greek Salad!

Halloumi, imported blue cheese and feta contain the highest amounts of salt. I am just thinking about all the tasty salads we might be eating during the summer months with these cheeses in…………mozzarella, cream and cottage cheeses however contain much less salt. Cheddar, one of the UK’S most popular cheese sits in the top half of the table. I am not saying never eat cheese again, this is about that word ‘moderation’ again. Cheese should be seen as a treat, not an everyday food (it is also high in fat), so eat it and enjoy but have it more sparingly than you might usually.

These ‘cheese’ strings look pretty revolting to me anyway!

It’s also important to think about the cheese that children eat. The cheese strings, triangles and  spreads are all marketed as ‘healthy’  and focus on them being rich sources of Calcium needed for growing bodies. Fair enough, cheese does contain a good amount of Calcium but children should only have small amounts of salt. These products contain just as much salt as standard cheddar cheese and a 20g cheese string portion contains nearly half a gram of salt. These cheeses should only be given to children occasionally. You do not need to rely on cheese to get Calcium, choose milk, yoghurts, fortified breakfast cereals (low sugar please!), eggs, vegetables, fish and meat.

When it comes to cheese making, as I mentioned earlier, some salt is needed but the fact is this study argues it can be made with less. The research showed that branded cheese was worse in terms of salt content when compared to the same type of cheese of the supermarkets own brand. So have a quick look when buying cheese, perhaps you will save a few pennies too by choosing non-branded cheese!

Kawther Hashem, a nutritionist for CASH and co-author of the study says  “It’s worth looking at the label and choosing a lower salt and fat version of your favourite cheese, or better yet, to eat very small amounts”

7. What are the benefits of reducing salt intake?